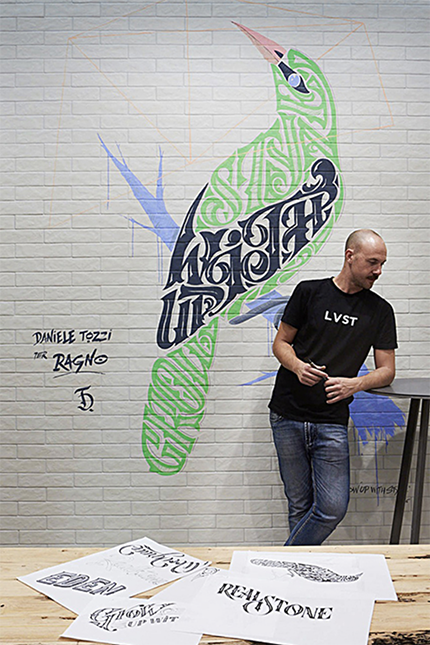 Daniele Tozzi is an Italian lettering artist whose work derives from the field of graphic design and graffiti. Born in Rome in 1981, Tozzi came in contact with the underground culture in the second half of the 90s, when he started writing graffiti. After high school,

he graduated in Digital Design on European Design Institute (IED) in the capital of Italy and began to work as a graphic designer for agencies and brands. Since few years he’s a freelance creative working for Italian and international agencies, for clients such as: Chesterfield – Nastro Azzurro – Oakley – Ceramiche Ragno – Bridgestone – Casio G-Shock – Econocom

Lettering art:
The core of Tozzi’s highly refined and personalized body of work is lettering, a visual art related to writing, his newly discovered love for drawing letters made the young artist engage in studying of diverse techniques and tools, until he found his own style of letters.
Over the years, Tozzi began to paint paper with acrylic paint and colored ink by using an old technique that fuse lettering and design:
the calligram. Tozzi’s artwork created by the words are formed or supported by different fonts and writings, not infrequently referencing graffiti. One of the biggest inspiration of the artist is music, so many of his artworks are made by words and quotes taken from music background of the artist cleverly arranged into shapes that became objects or silhouettes.
The lettering Daniele Tozzi employs in his artistic practice is a permanently changing experiment filled with typography, famous slogans
or songs, mottos, or important notes from the cultural heritage or beliefs of the artist.
From 2010 began his documented artistic career, showing his canvases in different galleries and art festival in italy

Urban art:
He never considered himself as street artist, even if it happened that art festival and projects involved him to make walls and big productions. Street art is something very linked to graffiti, made in the night time, without any permission, just spontaneous acts that leave messages on the streets, they can be words for the graffiti or visuals for street art. He consider itself a lettering artist, began from the streets and then evolved to paper and ink, joined what can be considered the post-graffiti movement.