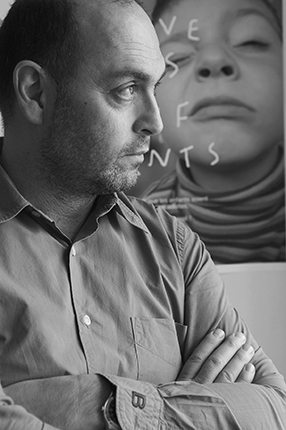 Serge Bloch is a French illustrator, born on June 18th 1956 in Colmar, France.

He attended the illustration workshop in Ecole Superieure des Arts Decoratifs de Strasbourg and after his graduation he started working for children and teen literature. More specifically, he has been the visual chief editor of Bayard Jeunesse.

He was awarded several international prizes and gold medals in recognition of his work.

His contribution to the communication world has been constant since he had created his own communication agency right after graduating from Arts Deco. In this field he has worked with prestigious firms such as Hermes, Coca-Cola, RATP (Parisian Mass Transit), Publicis (Paris). The French Telecommunication Agency, La Poste, issued Autumn stamps that Serge created in 2010.

Serge’s books are internationally translated and published. For Serge’s first Japanese book, Inochi no Kazoekata (Chikura Shobo publishing in 2010) he collaborated with Kundo Koyama, the screen writer of Departure which was awarded the Best Foreign Language Film Oscar in 2009.

Serge shares his time between NYC and Paris. He has expanded his area of expertise by entering the fine art world including exhibitions in New York City, Paris , Seoul….