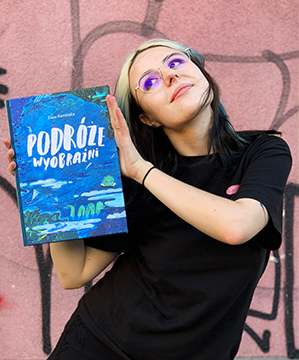 Zuza Kamińska is an illustrator born in Poland in 1997, where she graduated with a graphic design degree from Magdalena Abakanowicz University of the Arts in Poznań. She was also a student on grant programs in Kyoto City University of Arts in Japan and Universidad de Bellas Artes in Malaga, Spain. In 2019 Zuza received an honorable grant from the Ministry of Culture and National Heritage of Poland for achievements in the ﬁeld of visual arts. She now lives in Berlin with her 7 rescued laboratory rats.

Her works have been exhibited and awarded in competitions around the world. She often addresses important topics such as: women rights, ecology, LGBTQ+ rights, animal rights, refugee experiences, global political events, and a clear stance against homophobia, xenophobia, and racism. Kamińska creates illustrations, paintings, animations, and posters. She enjoys experimenting with media such as woodcut, intaglio, screen-printing, linocut, clay, and many others. Despite being an artist she is also an activist, mostly engaged in the ﬁght for women’s rights. She is a founder of the online initiative, Art Auctions for Ukraine, which raised more than one million zloty ($200,000) in the ﬁrst two months. In her illustrations she uses traditional techniques such as gauche, watercolors, stencils, cut outs and color pencils. She illustrates mostly on paper or cardboard, but she isn’t afraid to combine these elements with digital media to create something new.